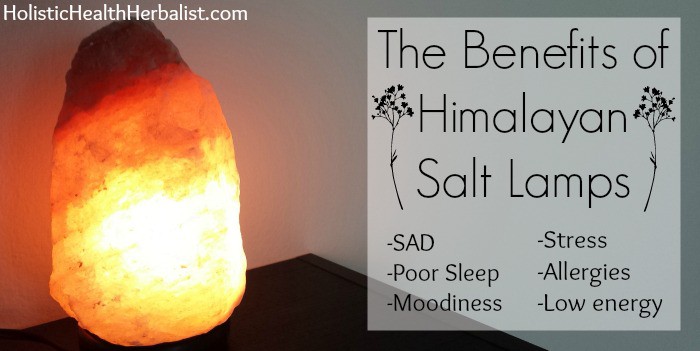 ) so when I saw a giant Himalayan salt lamp at my local home goods store, I HAD to buy it.

I didn’t buy it just because it’s beautiful; I bought it because of its purported health benefits like an increased sense of calm and daily stress relief.

The Benefits of Himalayan Salt Lamps

What is a Himalayan Salt Lamp?

A Himalayan salt lamp is made from a large hunk of Himlayan salt that has been hollowed out. A bulb is inserted through the hole at the bottom and then a wooden base is attached.

Most Himalayan salt lamps will have a simple on and off switch, but others will have “dimmers”. I suggest NOT getting the ones with dimmers due to their EMF output (I’ll touch more on EMFs later in the article).

These salt lamps come in a number of unique shapes and sizes such as:

• Baskets of rough chunks of salt

and other animal shapes
• Globes

I have always preferred the rough chunks of salt

for my lamps as they look like art pieces from nature.

Each lamp emits a pleasant orange glow that makes any space in your home ambient and peaceful.

Have you ever had the urge to inhale deeply after a thunderstorm, while strolling the beach, or when hiking near a waterfall? The reason may be because the air is charged with negative ions and your body wants more of them.

When we breathe in negative ions in the air, they instill a sense of well-being and have reportedly decreased health concerns like: 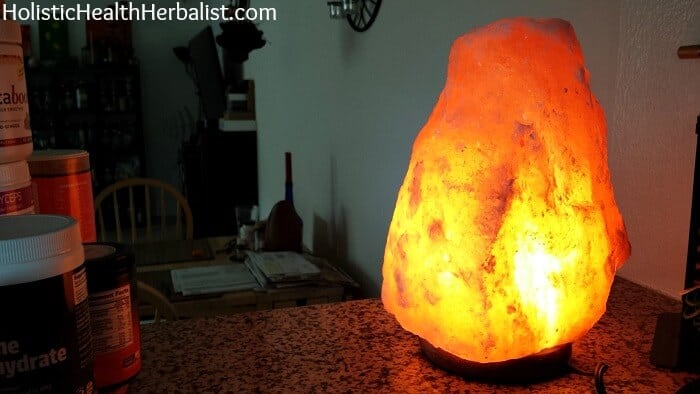 Just like pure beeswax candles, Himalayan salt lamps have the ability to release negative ions into the air. The salt attracts moisture from the air and evaporates it quickly from the heat of the lamp. This simple process is what creates the negative ions.

Airborne debris like dirt, dust, pollutants, pollen, and other allergens all carry a positive charge. This allows them to float around in the air where they are easily breathed in. The negative ions released by the Himalayan salt lamps bind to the positively charged debris and make them drop harmlessly to the floor.

Here is more on the topic:

“The Himalayan Natural Crystal Salt Lamp also works as an air purifier. When lit, the lamp emits negative ions that fight against positively charged particles that cause you to feel stuffy and sluggish. The lit salt crystal clears the air naturally of allergens like smoke, pet dander, pollens, and other air pollutants. It dilutes odors so that you can breathe easier. People with asthma often find it helpful in reducing their symptoms. You can keep the lamp lit for as long as you like to maintain this purifying effect.”

One great thing about Himalayan slat lamps is their affordability compared to machines you can buy for the same effect. Personally, I love the soft ambient glow of these lamps and now have 3 of them in my apartment. I can easily sleep while one of them in on in my bedroom and they are the perfect night light to use in the kitchen and bathroom.

Another great benefit to having a beautiful salt lamp in your house is its ability to detoxify EMFs. In case you aren’t aware, EMFs are the electromagnetic frequencies emitted from electronics and are considered dangerous to our health. Growing research suggests that high amounts of EMS can contribute to sickness and disease. Now more than ever our bodies receive these artificial electromagnetic wavelengths in staggering amounts, up to 20x more than we’re used to. Using Himalayan salt lamps in your home can help neutralize the elctro-smog microwaves, electric ovens, computers, and cell phones produce.

To help negate EMFs, you can buy a USB salt lamp

to keep at your computer so that you can take a beautiful salt lamp wherever you go.

How do Himalayan Salt Lamps Work?

To use a Himalayan salt lamp most effectively, keep it lit as often as possible. I try to keep mine on 24/7 and I can really tell a difference. Having more than one salt lamp in each room or in the rooms you frequent most will give the best results.

Also, if you are treating seasonal allergies it is best to keep the lamp on all day and to close your bedroom door and windows to allow the negative ions to build up and circulate throughout the room.

Himalayan salt lamps will last indefinitely. It is the lightbulb inside that will need to be changed out on occasion. You can typically find these bulbs at your local home improvement store or online here.

Do you have any salt lamps in your home?

You may also like to check out my article on Himalayan salt inhalers.

You may also enjoy reading: 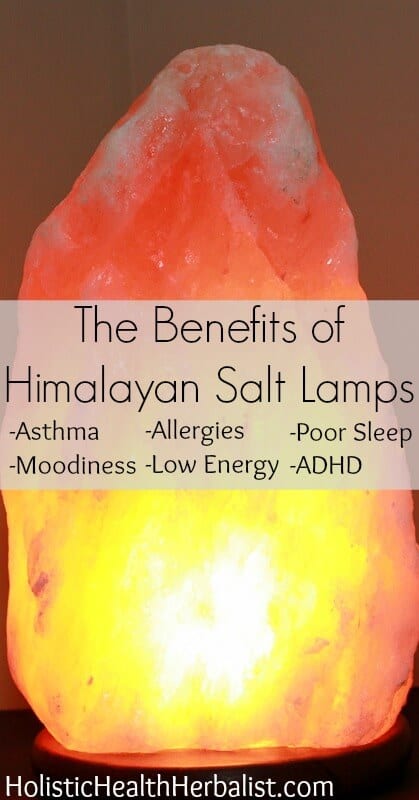